Pose star Billy Porter made his grand appearance at the Oscars in a gorgeous velvet tuxedo ball-gown which made every head turn! Designed by Christian Siriano, the gown took everyone by surprise with its elegance and awesome frilled sleeves. Porter looked no short of stunning and his poise, grace and that giant diamond ring by Oscar Heyman just added to his overall charisma.

During an interview, Billy Porter exclaimed, [At the first fitting in the gown,] I felt alive. I felt free. And open and radiant. And beautiful!” Well, you are totally right, Porter and the Twiterrati couldn’t agree more. The moment Porter’s pictures in the magnificent gown started doing the rounds of the internet, it took the netizens by storm. 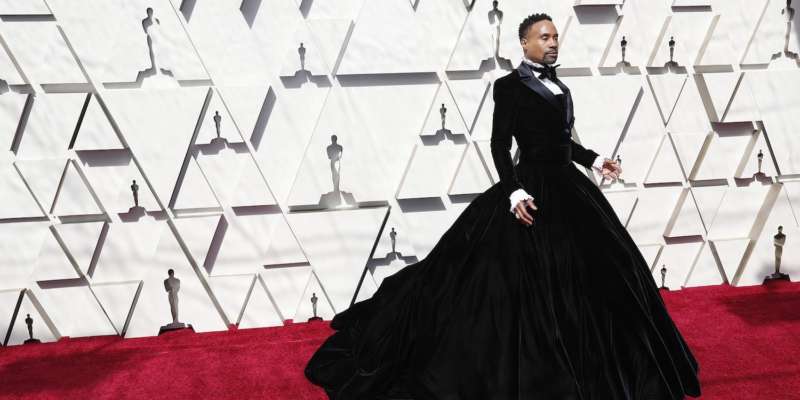 Mia Galuppo, a Twitter user, said that Billy Porter is the first and probably the best one she had seen so far on the red carpet. Louis Virtel, on the other hand, posted on his Twitter handle, “The next Ryan Murphy miniseries must be Billy Porter: Power Governess”.

Some even went on to say that the rest of the guests at the Academy Awards must go back to their homes as Billy Porter has just taken his game to a different level altogether. Many even called Porter the “Lord” and “President”, and Ben Platt’s tweet read, “The king of Siam better watch out cause Billy Porter has come to teach the children.”

One of our favourite tweets came from a guy called Benjamin Siemon, who seems to be keen on the Konmari Method of keeping the items that “spark joy”. His hilarious tweet read, “Oh no. Marie Kondo just folded Billy Porter’.

Well, Porter did deserve all this social media attention because he rocked that black gown like nobody business. He indeed looked like an emperor or a portrait straight out of a canvas. Thanks Billy for serving a scrumptious treat to our eyes!

Manikarnika The Queen of Jhansi

30 CEOs who have changed the way business is done the...