When you come to terms with you getting ignored, you get this hollowing feeling inside you and you begin overthinking. “Were I not good enough?”, “Did he get bored?”, “Did she find someone better?” are the questions that whirlpool in our minds. We regret the opportunities we could have grabbed, and better things we could have said. Here is why ghosting is one of the worst parts of modern dating:

A Cardinal Sin  We All Commit

In this age of modern dating where everyone is just a click away, ghosting has been quiet a common term and is considered to be a cardinal sin of dating in modern days. We have all been ghosted by someone at least once in our life. Someone you have been chatting to on Tinder all of a sudden stops replying to your messages; someone you are seeing for months suddenly doesn’t feel the urge to talk to you anymore, oh! Forget days and months- people even get ghosted even after years and years of being in a relationship. Some people just move away, without an explanation; just questions.

Ghosting isn’t a very smart way to deal with dating. If you are unhappy or have issues, just talk it out instead of never showing your face again and leaving the person waiting and overthinking for days. It is straight up rude. Well, we hate ghosting not just because it’s rude; it is also because we hate the feeling of being made small by someone we laid our faith on. We just cannot accept the fact that we just got walked over. This fear of ours slowly makes its way to our communication and attitudes. Sometimes ,we just forget people must have their own lives, their priorities, their own reasons what doing what they do At times, people ghost you because t hey feel suffocated and captive in dating you. We just want to feel safe and expect people to drop whatever they are doing and instantly reply to our texts or make plans with us. We always want to be their priorities but are they our priorities? Anyway, aren’t we all ghosting people on a regular basis? How many times we just archive a message or doesn’t click it with the fear of the blue ticks that they’d get? How many times we see a message and just tell ourselves we’d reply it later but that ‘later’ never comes? However, we don’t go on extending this behavior towards other important people in our lives. We are just so into our own lives that this pre-occupation of ours make us acknowledge other people might have these courtesies too.

Do you really need to panic? 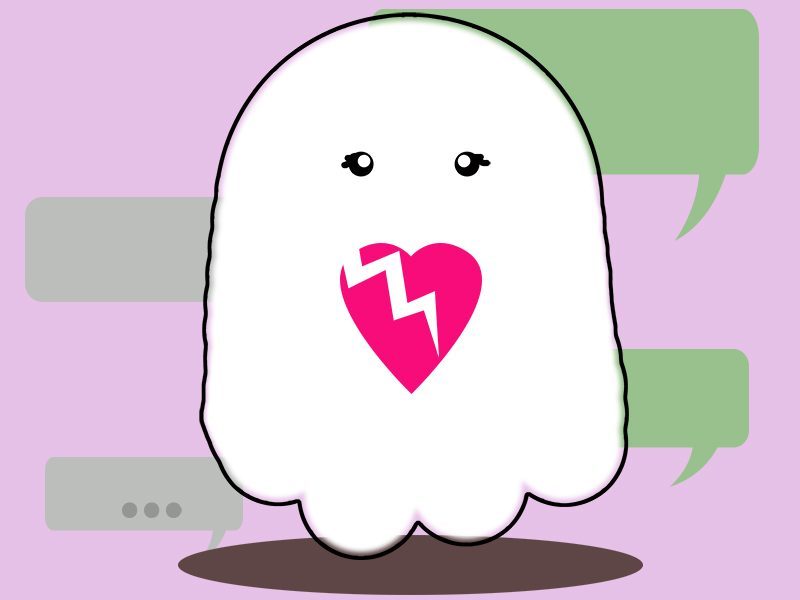 Keeping everything aside, there are times when someone really starts to ignore you and you begin to panic. However, before jumping to bizarre conclusion, keep your calm and think about the possibilities of them being engaged in work, meeting deadlines, bathing, on a call, hanging out with friends or simply taking a piss. And sometimes, people just want to be left alone for a while to clear their heads and get back to their feet. Maybe they are stressed, sad or are just not ready for a conversation. So, instead of thinking they are dead, hit by a truck or having sex with someone else, try this- give the person some time, don’t bombard their phone with calls and texts and even after that if things don’t fall in place, just visit them and ask what’s wrong. Try to understand if s/he is stuck in a rut or wants advice or are too embarrassed to share an issue with you. Be an ear to listen than a mouth to accuse. Don’t let getting ignored take away your ability to think rationally and don’t let it invade your brains like a thirsty parasite.

A feeling worse than heartbreak

The problem of making someone your top priority is you expect them to make you theirs. Keeping your happiness in somebody else’s palms and waiting for them for hours, not doing anything productive, can actually impact your self esteem and mental health. You just might end up liking yourself less.

Yes, being ghosted can hurt more than heartbreak as it is just so uncertain and vague. You wait and wait until you just lose sight of yourself and just hold yourself captive in the shadows of another being’s apathy. You know you heart is about to break but when? You have no clue of that. With every uninterested monosyllabic response comes a pathetic hope of holding on for a bit longer, trying a bit harder while the person might just not be into you. That’s just too sad.

The anticipation of pain can be so much more suffocating and painful than pain itself. You just don’t know what the person feels for you, you are unsure of what’s happening and what’s to follow. You are just stuck somewhere from where you can neither return nor go on. However, it’s the times of crisis when you need to pull yourself together, put yourself first and have a hold of your desperate heart. If s/he doesn’t value you enough to at least tell you before leaving, you don’t need such people in your life. When you hit the rock bottom, that’s when you can jump back up. Save your love, time and energy for someone who cares, who knows your worth, who doesn’t ghost you.

Have a happy day!

Places in the World that Will Take You Closer to the...

Breaking All Records, Avengers: Endgame Pulls in $1.2 Billion in the...

Kangana Ranaut warns Karni Sena ahead of Manikarnika If harassed I...